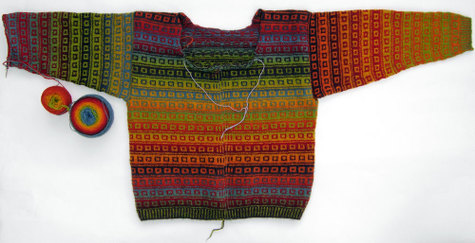 The right arm  is almost finished despite not knitting for a few days while recovering from an awful cold.

I don’t get very many unsolicited comments about items in progress from my husband but yesterday he asked if the arms of this sweater are suppose to be so different. Befuddled and not sure how to respond, I think I answered, “Why does it look odd?” He responded, “One of the sleeves has more orange than the other.”

Unlike the body, I didn’t think much about how the colors combinations on the sleeves would turn out. I just started the left sleeve with yarn from where I left off with the shoulders. Of course his comment started to haunt me and I soon started jotting down possible color combinations with the yarn left after doing the body (assuming I hadn’t started the sleeves).

So as I consider my options I’m finishing the right sleeve and will possibly reknitting the left one so that there will be less orange in that one.

Karen asked about teaching my niece to knit and her reaction to the yarn/toy store.

Teaching her went quite well considering she’s six years old. Her mother and father were amazed to see her sit and concentrate on one thing for a couple of hours. I casted on the stitches, showed her the movements a few times and then gave her the needles. At first I guided her hands but it wasn’t long before she was knitting by herself. I don’t think this was the first time she had done this because she mentioned that her friend has knitted with her before.

I’m not sure whether she’ll keep it up because the next day she didn’t ask about doing it again. I think six might be a little young to start.

I also forgot to mention that we drove to the Frio in a different car so she wasn’t with me when I bought the yarn and needles. That’s probably a good thing. Not sure what would have happened if we took the two children into that shop. Actually it was lunch time and Grandpa was really hungry so it was a very quick stop. The guy ringing up my purchases suggested a great BBQ joint a few blocks down at the junction of highway 46 and 87. It’s a combo meat market, BBQ restaurant and Shell gas station called Riverside Supermarket! We ate our lunch at one of the tables between the produce and meat case and enjoyed watching the locals line up to place orders. The sliced beef sandwich was so excellent taht we stopped by again on the way back to Austin.

Deborah asked, “How would you compare the length of color change in Kauni with, say, Noro Kureyon or Silk Garden?”

Kauni color changes are much longer than Kureyon or Silk Garden. I don’t know how much longer because I haven’t yet attempted to measure one of the colors in my skein. I’d guess at the length but I don’t think I’d be very accurate. Since the colors gradually change from one to the next, it would be hard figure out where one colors begins and ends.