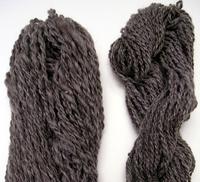 Can you tell which skein is from a wheel and which is from a drop spindle? The one on the right was spun with my drop spindle this summer and the one on the left is what I produced after my third attempt with a wheel. Now the teacher said not judge whether we like wheel spinning based on our first attempts because more then likely it will be frustrating and tiring. Hey, that’s what I always tell folks about snowboarding.

Tuesday I was able to bring home a double treadle Ashford Traditional Saxony for practice. Yesterday was my first solo attempt, which wasn’t too pretty in the beginning. Although I haven’t tried other wheels, I already don’t like this one. I’m having trouble moderating my speed. If I go slowly the treadles tend to get stuck but when I try speeding up I have trouble controlling the fiber. Next Tuesday I’m going to see if I can try a Lendrum folding wheel. This one seems much more practical for my lifestyle. The teacher was using a Schacht which might be another option but it is much more expensive then the others.

Unless my spinning gets much better this weekend I won’t be spinning my merino. It was totally unrealistic to think that I could produce acceptable sport weight merino yarn after only a few attempts.