The NWRSA conference offered two days worth of classes by various instructors such as Judith MacKenzie McCuin, Myrna Stahman and others. While I would have also like to attend many other classes, I felt like this might be my only chance to take classes from Rita Buchanan, who is now retired. During the past six months I’ve been collecting past issues of Spin Off magazine and always find her articles to be some of the most detailed and helpful. I realized after talking with many of the other attendees that I was very lucky to get into all four  of her classes since there was a limit of 20 students for each class. 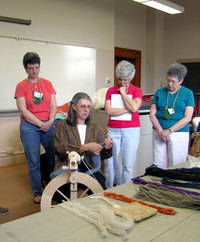 On Friday,  I was so anxious to get to class and set up that I arrived 1/2 hour early and found Rita setting up her samples. Since on other students had yet arrived this gave me a chance to let her know how helpful and inspiring I’ve found her articles. She was quite pleased to get this feedback and mentioned that writing is so different than teaching since there is no immediate feedback from readers. I also mentioned that I’d sent Amy (the current editor of Spin Off) an e-mail suggesting that they compile Rita’s articles into a book. She seemed glad to hear the articles have been so helpful but that she’s now retired and no longer wants to write. Compiling articles might seem easy but since her thoughts and ideas have evolved over time, she would need to edit the content. This response makes sense. I could tell after reading all of her articles that her ideas have indeed changed over time, i.g. techniques for measuring yarns, and sympathize with her desire to concentrate on the things she loves to do.

One thing I didn’t get around to asking, was if she is still actively teaching. I would guess that she probably doesn’t and might have taught at this conference as a favor to a friend when Norman Kennedy had to cancel due to health concerns.

This  first class was called, Nice Soft Yarns. Rita kicked it off by having us treadle our wheels at our normal pace for one minute, counting each rotation. After the minute was up she had each of us reveal our counts. Mine was within range of most people – 55. She then had us treadle fast for 30 seconds. I got 48 that time. She has done this at lots of classes and said that west coast spinners are pretty relaxed compared to folks on the east coast.

The goal of this exercise was to get us thinking about the fact that we control twist and that the movement of our feet is one of several factors that can help us produce the type of yarn that we want. One of the other factors is how much yarn is feed into the orifice at one time s0 she next  had us practicing hand movements while she  treadled her wheel.  This reminded me of something a sports coach would do, essentially, going through our movements without actually spinning. Our hand movements were mimicking what most people call a short draw.

After getting us to focus on our movements, she passed out pencil roving from Fingerlakes Woolen Mill and a couple of index cards with holes punched down one side.  She wanted us to create plied samples from the finger roving by spinning it without drafting and staying conscious of three factors as we worked. First we needed to keep our drive ratio constant by not changing the whorl. Second, we should try to keep the maximum distance between our two hands the same (about three inches which is the same length of an index card). Third, treadle the same amount of times for each cycle of hand movements that let twist into the fiber.

Once we got comfortable spinning in this mode, we stopped and made a 2-ply sample by letting the single twist back on themselves. My first yarn sample was done with four treadles per 3 inches of  feed, using the outer ring of my slow whorl (the card in the upper left side of the picture). We attached the sample yarn to a card and noted the various factors used.  Next we were asked to make more samples but change the number of treadles. Each yarn sample was labeled with the number of treadles. By completing several samples and changing only one factor we could plainly see the results. A greater number of treadles produced a dense rigid yarn while fewer treadles create a soft puffy yarn. We continued to make another card full of samples (the card in the lower right side of the picture) but this time we changed one of the other factors. I choose to change my whorl. To get a closer look at my samples, click on the picture and a closer view should pop-up.

Once we were finished making our samples, Rita explained that we can use this method to help figure out what type of yarn we would like to make. She then pulled out some samples of items that she had made with soft yarns and debunked some of the common myths about soft yarns. She said that a single only needs enough twist to keep it from breaking as it is unwound  from the bobbin.  But keep in mind that short fibers and thin yarns usually need more twist. Also don’t judge a yarn by it’s twist. Tightly twisted yarns can make great looking skeins but produce an  undesirably stiff knitted fabric.