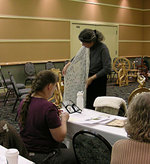 What a great opportunity! Two wonderful teachers teaming up to teach a two day class about Estonian Lace.

Nancy Bush started off the class with a brief slide show of pictures that she had take during her trips to Estonia, giving us the history behind Estonian Lace. Long story short, the women of Haapsalu* started knitting lace shawls in the the 19th century to sell to tourist visiting the resort town. During the introduction I could feel her excitement for this country, it’s people and it’s crafts, so I asked how she became drawn to it. While researching ethnic knitting she came across some pictures of Estonian costumes and knew she had to visit. On her first trip to Estonia she instantly feel in love with it and has gone back several times to do more research.

After the slide show Judith took over and got us started spinning Corriedale top as a warm up. As we spun this rather course top, Nancy and Judith mentioned that Estonia really doesn’t have a sheep raising tradition so the yarn that the lace knitters use comes from countries that surround Estonia. Nancy mentioned that these days it’s hard to find a light-weight yarn to reproduce the lace shawls from the last century. Judith says that commercial mills are not able to spin very fine wool, at least not the type that was used in Estonia. Nancy also mentioned that she gave showed them some merino wool to use for lace knitting and they wouldn’t believe it was wool. Apparently, the softness of the wool threw them off.

After warming up Corriedale top, Judith brought out mill prepared Rambouillet that I believe had been combed. Rambouillet is a breed of sheep that originated from Spanish Merino sheep in the late 18th century. Like merino, this breed produces very fine fibers that are well suited for lace spinning.
Although I haven’t spun much fine weight yarn, I do find that spinning lace isn’t all that difficult if you use a fine wool, such as Merino or Rambouillet, that’s been well prepared and combed.

The best technique for spinning fine yarn is the worsted method; letting no twisting into the fiber supply.  Judith had us using our smallest whorl and setting our drive band tension very low. essentially no pull from the uptake of the bobbin. She suggested that if our wheel came with a Scotch tension option, then we should use it for better control. She also mentioned that a thinner drive band is better for spinning lace but I can’t remember why.

We spent most of  morning on the first day spinning our  Rambouillet and getting tips from Judith.  The class  had 30 students  so it  took a while for  her to make  the rounds. This is what I  enjoy about  Judith’s teaching style. No matter how  many students there are, she  always makes a point of  catching up with each person to  see  how they are doing. If a student is having trouble  with their  wheel,  she knows how to fix it and will get the spinner back on the right track.

The next morning Judith demonstrated how to ply (see photo on the right). Her left hand is holding two singles almost the same way a knitter will hold two strands of yarn while doing a long-tail cast-on. The trick is to keep this arm stretched out from the orifice and not to let go. She warned that if a free hand is needed to answer the phone or do something else while plying then let go of the threads in you right hand. The fingers on the right hand are used to guide the threads into the orifice. The middle finger is placed between the two threads and the index finger works with the thumb to pinch out any slubs. Notice that she’s plying from a lazy Kate that’s holding two very small bobbins. She likes to wind her threads onto weaving bobbins and alternate between several to get a more consistent yarn.

Since were probably wouldn’t have spun enough yarn to knit samples in the afternoon, Judith gave us all a small ball of hand spun yarn to start our knitting. Here’s a picture of that yarn (left).

During the afternoon, Nancy brought out her collection of lace shawls and explained how she’s working with several Estonian women to document Estonian lace in a forthcoming book.  She mentioned that each trip seems to reveal one more tidbit of information that she’s surprised didn’t come up on a previously.

After getting a glimpse of the possibilities, Nancy had us start on samplers of several common Estonian patterns. I managed to only finish one called “vaosabakiri” (peacock) before moving on to the Lily of the Valley Estonian Lace Sampler. 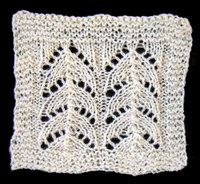 Both were knit with the yarn supplied by Judith.

I finished spinning the Rambouillet the week after class and have yet to knit any thing with it. I’m not sure if there’s enough to make a scarf or perhaps I’ll knit more of the sample patterns that Nancy gave us. The picture below shows my skeins and for a comparison, includes a piece of Cascade 220 at the bottom.

*For further information about check out Nancy’s article, ” The Lace Knitting of Haapsalu”, PieceWork – Jul/Aug 2005

9 thoughts on “Estonian Lace with Judith and Nancy”