Plan: Since it’s the first business day of the week, head straight over to Jamieson’s Spinning Mill in Sandness on the Westside of Mainland. In the afternoon return to Lerwick and check out the new museum. Time permitting do some shopping on Commercial street. In the evening head over to Isleburgh Exhibition.

Jamieson’s is the only mill on the island that spins and sells Shetland wool so of course I had to go check it out first thing Monday morning.

Although I knew from various sources that it was about 30 miles from Lerwick I wasn’t too sure how long it would take to get there. It’s on the Westside of Mainland, well off the beaten tourist track but probably on every Fair Isle hand knitter’s radar. To get there one first goes north on the main highway until the turn off to Weisdale Mill. Until last fall this mill housed the Shetland Textile Working Museum. Sadly, the textile collection is currently without a home. I hope the Shetland Guild of Spinners, Weavers & Dyers can find a new home soon. I’d love to see their collection some day. After Weisdale the road veers west and eventually gets narrower the closer one gets to the mill. The landscape is quite different from the south. It’s a remote rock strewn landscape with very few houses but sheep everywhere. An odd place to find a spinning mill.

We arrived around 9:30 and poked our heads in the door. The place looked and sounded deserted. Nobody

was in the office and we didn’t see any one near the door to the mill. I was too shy to wander around the place looking for someone so we waited for several minutes before someone eventually appeared. A woman guided us to the “start” of the mill near the weaving looms and then promptly left. We stayed at the looms for about 10 minutes but the woman didn’t reappear. Besides one guy attending the weaving looms the place seemed to be void of workers. When it didn’t seem like the woman would return we moved along stopping at each machine and guessing its purpose. Having read a bit about spinning mills and previously visiting a Mission Mill Museum, I had a good idea of what each machine did. So I guide us through the process. If you are interested in seeing most of the machines here’s a link to my photo album. I can’t promise that the descriptions are totally accurate.

After being there an hour or so we happened to come across the break room and could hear people on the other side. When a man, whom I think was Peter Jamieson, came out the door I commented on how it looked like things were kind of slow this morning. He said that they wrap up production on Friday and start over again every Monday. So from that comment, I  guess he’s saying that it takes a while to ramp up on Monday. Perhaps we caught them between dye lots. He also commented that some machines in another part of the mill were running.

After passing by all the wool processing machines we came across a room where several knitting machines were spitting out jumper (sweater) pieces. Most of the colorways really didn’t appeal to my sense of color. But as the saying goes, to each his own. I suspect these jumpers end up in Japan.

Eventually we wound up at shop door and found someone to let us in. I easily by passed the stacks of blankets and jumpers for the huge wall of yarn – floor to ceiling of cubby holes filled with yarn. I started pulling out yarns looking for enough to make Arabesque from A Collector’s Item. Again we were left alone, which I didn’t really mind. I was stunned by this cathedral of yarn.

After sorting through yarn for a half hour and having a hard time finding several that I needed, Paul went off to find someone to help out. The woman who we saw at the beginning of our visit appeared. She said she wasn’t surprised that several colors were not out because  a bunch of knitters had been in on Friday (maybe from the Skeins and Skerries tour?) and the shelfs hadn’t been restocked. She gladly took down the colors I needed and went off to fetch them from the mill. She couldn’t find one color so I asked if she could check with the shop in Lerwick to see if they had it. I was in luck. They had one bag that I could pick up when I got back to town. 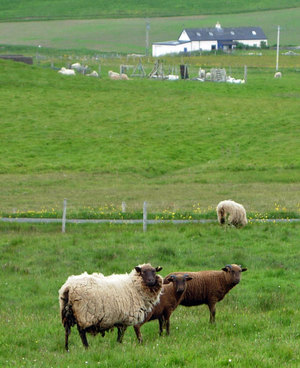 Around noon I finally settled my yarn purchases and was ready to head back to town. I wanted to pick up that last remaining pack of yarn before the clerk at the shop forgot about the call. She didn’t seem all that helpful the last time I was there.

So that’s only the first half of the day. More to come later.

9 thoughts on “To Westside and back”