In the software development world, one can’t help but hear the phrase “analysis paralysis“. We’ll this past week I’ve been stuck in that mode as I try to decide on which cast-on method to choose for the Log Cabin socks from “Handknit Holidays”.

I’m not a novice when it comes to knitting socks but I still can’t help wondering if I’ll ever come across the perfect 2×2 cast-on.

Here’s my attempt at swatching the tubular cast-on as shown in “Basic Knit and Crochet” by Ondori. 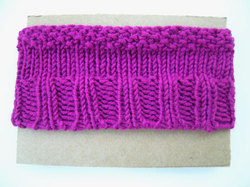 Kind of sloppy for my taste. OK, I will admit that if I had used a smaller needle it might have come out better but I don’t think that would get rid of the splayed knit stitches.

At this point, I’m toying with the idea of doing an provisional cast-on and then binding off using the sewn method show in Simple Socks. It won’t be the first time I’ve used that method but to be honest, I really didn’t think it was all that elastic.

Funny thing is, this afternoon I happened to see this commercially made knit hat (made by Pistil) in a shop that has a very neat elastic edge. It didn’t look like any cast-on / bind-off that I’ve seen before. For the life of me, I couldn’t figure out how it was done and although it’s a splendid cap, I wasn’t willing to plunk down money for it just so I could figure out how the edge was finished.