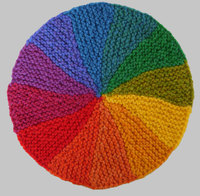 Seems like I can never resist a class on color even though I’ve taken several and own a handful of color theory books.

Vivian kicked off the class with quite a story about how it came about. Apparently the idea started as a request from  Harrisville Designs and after several months (or weeks) of reading about color theory she almost decided not to do it. All those theories seemed rather boring to her and began to drive her crazy.

This type of talk isn’t what you’d normally expect from an instructor and I’ve got to admit it kind of shocked me. But, as she continued talking I began to relate to what she was saying. I too get stressed out whenever I pull out a color wheel and try to apply those theories. Her remedy is to get out knitting needles and yarn and start playing.

She skimmed over basic color concepts such as – primary, secondary and complimentary colors, and mostly focused on mind stretching swatch exercises. She challenged us to break out of our comfort zone by introducing colors we wouldn’t normally use along with ones we do. Many students were pleasantly surprised to find that what they think of as a “ugly” color might not really be so ugly and can add interest.

Between the three swatch challenges Vivian shared a slide show of things/people that inspire her. At the end of class she passed out her garment samples and let us try them on. Nihon Kimono is on my “some day” list.

While Vivian had many memorable quotes  but “Brown is a mistake” made me chuckle the most.

Here are  some photos. 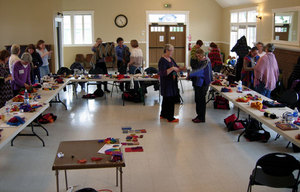 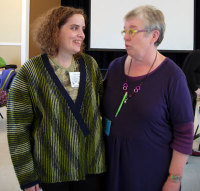 PS: Mittens is doing great. She had a good check up today but the poor girl has to keep the “halo” for another week when the stitches come out. Both cats are on a prescription diet that they actually like. No picky eaters here.

Thanks for all your well wishes.

7 thoughts on “How to brighten a grey Seattle Saturday …”