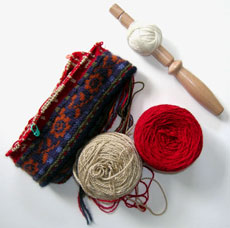 As you can see, I didn’t get very far with my knitting. I’ve been spinning a bluefaced leicester top in preparation for the one of Rita Buchanan’s classes called Plying with a Handspindle. Along with our favorite spindle, we’ve been asked to bring three medium sized center-pull balls of handspun singles. The photo shows one of my balls still on a nostepinne.

This bluefaced leicester top is so much easier to spin than merino, because of it’s 6 inch staple length. The unspun fiber seems so soft that I think it will also make a relatively soft yarn with a bit of luster. The price is right at about $1 an ounce.

This quarter’s Spin-Off magazine arrived a few days ago.  What’s up with Spin-Off? The past few issues really haven’t been very good. I guess I’m not the only one that think the content is lacking good quality in-depth articles. One of the letters to the editor mentioned that Spin-Off’s content  has been a recent topic of discuss on a online discussion group. The editor responded by saying that she would love hearing from readers with specific feedback. I’m already working on my letter. 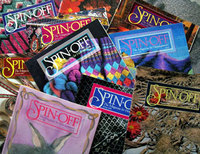 Over the past six months I’ve been collecting back issues of the magazine and can tell you that there’s a big difference between the ones from the 80’s & 90’s and the ones put out since Amy Clarke Moore took over.  Perhaps Spin-Off has covered everything  there is to know about spinning during the first 25 years and is having trouble coming up with original content.

I did sent an e-mail to Amy in December and mentioned that Rita Buchanan’s articles are among the best and suggested putting them together in a book. She responded, saying that I’m not the first to request this but Rita is enjoying her retirement and doesn’t have time to put a book together. That’s too bad. I’ll suggest it to Rita when I take her class. I don’t see why it would be so much work to compile the articles straight from the magazine without any changes. Heck can’t the Spin-Off staff do it?

Besides the lack of truely interesting content, at the moment, my other top complaint is that covers of the subscriber issues are marred by a big white address box. Good heavens, what were they thinking when they decide to do that. If they keep it up, I’ll let my subscription lapse and perhaps buy it at a bookstore.  They should follow what Saveur magazine does, and use a easy to peel (0ff) address label.