Here’s my entry into the Kauni world. The yarn sat for a few days before I could decide what cast on to use and where to start with the color sequence.

It’s a cable cast on with the first row of  knit 1 purple, knit 1 green. The second row is knit 1 purple, purl 1 green. Knitting the first row in alternating colors avoids leaving that odd looking line that can show in the purl part of the rib. That happens if the cast on color is different that the purl color. The bottom edge does curl oh so slightly but will lay flat when washed and dressed on the woolly board.

Popped by a few yarn stores yesterday and was introduced to Jitterbug. An interesting sock yarn that reminds me of Socks that Rock (STR). Maybe not the colors but the type of yarn and sheen is very similar. 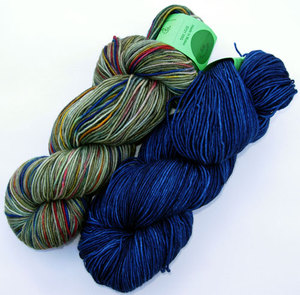 I was in a STR quest yesterday that took me to Tricoter for the first time. I was pleasantly surprised to find the staff very friendly and helpful.

Still waiting for my Anne-Evilla kit. It could be almost anywhere because I messed up my order by mistyping my address. There’s no such building at the address I entered; just an empty lot. Perhaps the girls at the strip club next to the lot got it, but I don’t have the courage to go over there to ask. Or maybe it went to the car repair place run by Ukrainian immigrants. I called the post office and they said it’s probably on it’s way back to Denmark. Now I’m in negotiations for another kit.

9 thoughts on “Kauni here I come”